Quick links or scroll down the page

The Museum of London in collaboration with Illumini is hosting a free night of electrifying performances, visuals and hands-on activities, in the newly refurbished Sackler Hall and Galleries of Modern London will be open late.

Visitors entering the event will be treated to dynamic dance performances in the foyer by young dancers from Union Too. Flooding the underground space of the lower galleries will be an electro soundscape made up of live tracks created with a mix of turntablism, retro toy twisting, sonic weapon and dirty breaks. Amid the heavy sounds, those exploring the galleries will discover dancing robots, electronic humanoids and LED dancers, as well as futuristic jugglers and magicians, showcasing their skills, courtesy of Illumini.

Party goers will get to test their creativity by turning their hands to virtual graffiti and have a chance to emulate past London styles, from Teddy Boys and punks to hippies and mods. A photographer will be on hand to capture visitors’ alter-egos, inspired by items from the museum’s collection.

Plug In festival is part of Stories of the World, one of the major projects at the heart of the London 2012 Cultural Olympiad . As part of the Plug In festival the museum will also be hosting a fresh take on gallery tours, a careers event for young people and an afternoon of youth culture in film.

In Partnership with Illumini (curated by Jane Webb )

Living stone statue and walkaround performance with a difference. The Mad Scientist with this amazing costume that illuminates, will be interact with Museum guests.

Deryck has over 12 years experience of performing magic. he will mingle with the guests amazing them with his skills and tricks

HARAJUKU Neon ZOOHARAJUKU ZOO animals are escaping from the screen frame. Watch your back! The candy-coloured characters might surprise you… Inspired by Electro-Late at Museum of London, the HARAJUKU ZOO characters will be in NEON disguise as if escaped from a Tron landscape. Exploring the museum and appreciating the displays….

Primo is over 6 foot tall and is able to communicate with guests, sing and dance and has many sound effects to dazzle and amaze everyone of any age.

Cyber-tech is a company run by Rob Clapperton, it specalises in Robots and Specialty Character Performances.

Artist and performer Simon Rogers will create an electronic character , by body painting a human body, to transform into a electronic Robotic humanoid.

Glow costumed Performer with an amazing light show. You will find The Glowman hidden inside the Galleries of the museum, where he will come to life with an rhythm glow performance.

Guy Smith is a Fire and Glow performer.

Tiina is a circus art performer, specialising in hula-hoops and hand balancing and is also a member of Hoop La La, a hula-hoop performing trio who hold a Guinness World Record in professional circus performance.

Recycled computer and electronic components are assimilated and transformed to create this humanoid.

The illuminated visitor will appear at the museum for Electro-Late, for its first appearance in public.

The Crystal Wizard is Chris Brown, an internationally renowned contact juggler. For Electro-Late he will amaze you with his juggling skills. 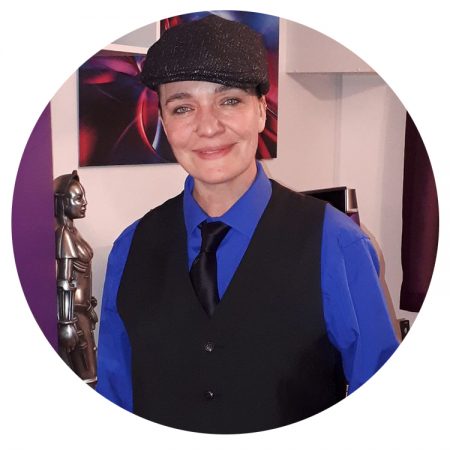 Jane Webb is an artist, designer, curator & event organiser, who runs a British contemporary... studio, specialising in a creative practice in art, design and prop making. Bespoke graphic design created for vehicles, furniture, décor and walls. Jane creates props from a large range of materials for stage, film, TV, museums and events. She also runs Replica Vintage Cans, that make replica food, drink and motor oil replica cans, which have been featured on TV & Film internationally. They are ideal for display or cutlery holders, plant or flower pots. Jane exhibiting artworks consist of, futuristic illuminating sculptures and installations made from recycled electronic waste where computer and electronic components are assimilated. These can be hired, purchased or commissioned for events, festivals or public art. Jane has shown work at the prestigious Victoria & Albert Museum, The London Museum, and various festivals and events throughout the UK including being the recipient of awards. Her work has been featured in international press and TV. She is also the founder of Illumini that creates large scale free events in subterranean spaces, which attract 7,000-9,000 visitors. Jane can help you with your event, from artists, performers, installations to event management. Illumini supported, promoted and mentored artists at any stage of their career from any background. Her passion for using recycled items within her sculptures and for replica vintage cans to creative ways with furniture and other items launched, Funk the Junk a shop and a blog sharing creative ideas to use recycled items. 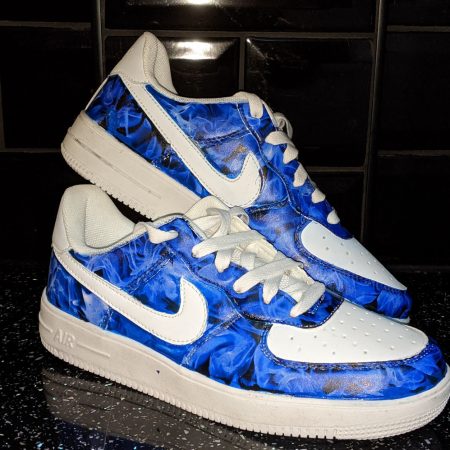 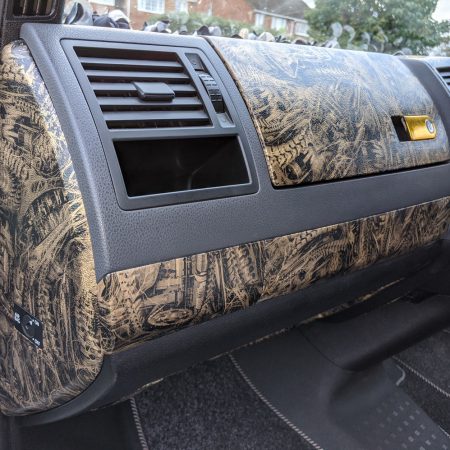 Hydro dipping dashboard on a VW camper
Back to top